His clothing ragged, Hubbard D. Pryor made his way into Union lines in Tennessee in April 1864. 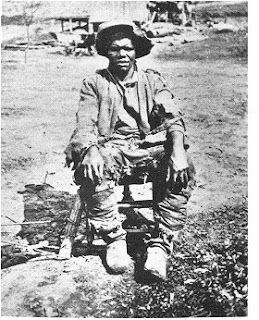 Pryor (left), an escaped slave from Polk County, Ga., quicky joined up with Company A, 44th U.S. Colored Troops. A photographer captured these images before and after he took on the blue Union uniform.

Perhaps because of the photography style of the day, or because of his ordeals, Pryor’s expression gives little evidence of the pride he surely felt.

The 44th, which was organized at Chattanooga, Tenn., and Rome and Dalton, Ga., eventually saw action in Georgia, one of the few African-American units to fight in the state. 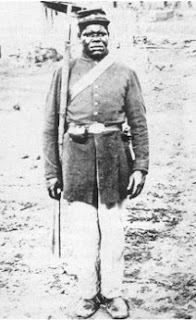 On Wednesday, a marker honoring the service of the 44th and other African-American units will be dedicated at Fort Hill School in Dalton. It was one of many regiments formed during the war, in which 200,000 African-Americans fought for the Union army and navy.

The sign, sponsored by the Georgia Historical Society, the Georgia Battlefields Association and the Georgia Department of Economic Development, honors the 44th USCT, whose enlisted men were mostly former slaves.

By late summer 1864, the 44th USCT contained some 800 black enlisted men and was commanded by Col. Lewis Johnson, who was white, according to the New Georgia Encyclopedia.

On Aug. 15, 1864, the regiment helped drive off a Confederate cavalry attack on the Western and Atlantic Railroad.

Approximately three-fourths of these black soldiers were doing garrison duty in Dalton on the morning of Oct. 13 when advance units of the 40,000-man Army of Tennessee, commanded by Confederate General John Bell Hood, converged unexpectedly upon the little village, cutting off all avenues of retreat.

According to the encyclopedia, Hood vowed to take no prisoners if the Union defenses were carried by assault and later added that he "could not restrain his men and would not if he could."

Although Johnson claimed that his black troops displayed the "greatest anxiety to fight," he surrendered to Hood and secured paroles for himself and the 150 or so other white troops. 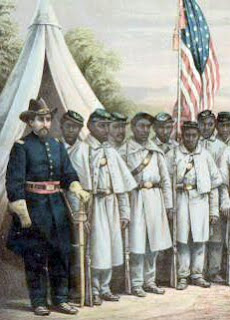 “The black troops, by and large, did not want to surrender. They knew that capture for them would mean death or beatings or at the very least being returned to slavery,” Robert Jenkins, a member of the Dalton-Whitfield 150th Civil War Anniversary Committee, recently told the Daily Citizen in Dalton.

The regiment's 600 African-American enlisted men suffered a harsh fate. Some were re-enslaved, while others were sent to work on fortification projects in Alabama and Mississippi. Many ended the war as prisoners in Columbus and Griffin, Ga., where they were released during May 1865 in what one of them described as a "sick, broken down, naked, and starved" condition, the encyclopedia says.

Pvt. Hubbard Pryor survived the war and married in 1870. In 1890, he wrote to learn if he were eligible for a pension, but he died that August before he could apply.

The enduring photos of him are among the finest of tributes to African-Americans who fought for their country.