Fort C.F. Smith in Arlington was among 68 that kept Lincoln's Washington safe; park's new visitor center tells the story of these defenders

The boys of the 164th Ohio Volunteer Infantry were quite pleased with their new post after they completed a journey that took them from Cleveland to Washington, D.C.

Upon arrival, they marched down dusty capital roads, across the Potomac River and onto the ridges and ravines of Arlington Heights, on the Virginia side. There, they joined the garrison of Fort C.F. Smith, the last in a string of defensive fortifications that stretched southeast toward occupied Alexandria.

The troops could feast on luscious blackberries in the thickets (though the grounds had been denuded of trees so that the artillery would have a clear line of fire), or saunter down to the Potomac River, less than a mile away, to harvest tasty fish and eels.

“We have a most splendid location, at an elevation of two hundred feet above the Potomac river; overlooking the country in every direction,” a soldier wrote on May 21, 1864, to the Tiffin Weekly Tribune (left) back home. “Off to the east, in full view, is the city of Washington, and the capitol of our nation; to the south lies Fort Strong; in the west the Potomac winds its way through the hills, and in the distance may be seen Ft. Ethan Allen; to the north a beautiful array of hills, with splendid residences dotting them here and there.”

That sense of relative calm and comfort was common for thousands of artillerymen and infantry who occupied 68 enclosed forts encircling the capital. Twenty-two of them were in Alexandria (now Arlington) County.

None in the county saw action, but there was always the threat of a Confederate rush on the capital, which occurred in July 1864, sending the city into panic. That effort was rebuffed at Fort Stevens in Maryland, on the northern outskirts of Washington.

Earthwork remnants in the 19-acre Fort C.F. Smith Park are considered the best preserved of those 22 Arlington-area forts. While most traces are gone, the ruins of the lunette fort include a bomb proof, the fort well, the north magazine and 11 of the 22 gun emplacements.

Arlington County park officials late last month opened a new visitor center at the site. Inside are artifacts, photos, a searchable database for soldiers stationed at the fort and items geared for children, including a tent and uniforms they can try on.

While the park draws birders, walkers and others interested in a meadow and generous tree canopy, officials want people in the county to know more about its Civil War past. For a long time, that was limited to Arlington House, also known as the Custis-Lee Mansion, said John McNair, acting park historian at Fort C.F. Smith.

“Our goal is to … stir excitement in the local Arlington community for the Civil War history in their back yard,” said McNair.

The perimeter forts were abandoned in 1865 at war’s end. A few remnants exist, including at the county’s Fort Ethan Allen Park, which was located to the northwest of Fort C.F. Smith. Today, the site has a nearby county dog park.

A 1994 Washington Post article about the purchase of land for Fort C.F. Smith Park cited Civil War historians who said the capital's series of surrounding forts, trenches and cannon batteries made up a "largely forgotten legacy that literally is woven into the region's landscape."

Local counties and the National Park Service are trying to spark interest in their unheralded contributions to the war effort. After all, they kept the capital safe.

Trees were cleared and their wood used

Engineer Brig. Gen. John Gross Barnard designed and built the 68 forts, a task made much more urgent by the ignominious Union defeat at First Manassas in July 1861. Rebel troops weren’t far from the capital – in Falls Church, Va. The Union Army Balloon Corps spied on them from Fort Corcoran. 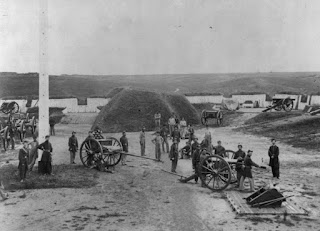 Alexandria County (which was renamed Arlington County in 1920) was largely made up of farms during the war. McNair said because the forts needed to be in cleared areas, few trees in those areas today are more than 160 years old. Barns and fences were taken down for fuel. The impact on Alexandria County residents was substantial.

Laborers cut down trees that were used for camp buildings, and the whole operation created new roads and infrastructure around the capital.

Barnard wrote: “Possession was at once taken, with little or no reference to the rights of the owners or the occupants of the lands -- the stern law of ‘military necessity’ and the magnitude of the public interests involved in the security of the nation's capital being paramount to every other consideration.”

“Fortifications suddenly grew stronger thanks to soldier and contract labor,” fort expert B. Franklin Cooling wrote in a feature article for the Civil War Trust. “A free black landowner watched her house crumble beneath soldier axes and sledgehammers as Fort Massachusetts was expanded and became Fort Stevens.”

About 20,000 soldiers were required to adequately man these forts. Generals who likely would have wanted them at the front knew that President Lincoln was consumed with protecting the city. 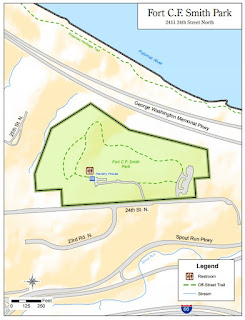 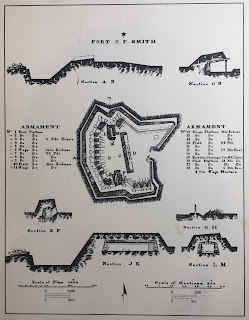 For some young men deployed in Virginia, it was their first experience in seeing plantations and enslaved persons.

“When soldiers enter Arlington from Washington they sometimes talk about entering the South, even the Deep South, like Arlington is like Alabama or Mississippi,” David Farner, a senior staffer with Arlington County Parks & Recreation, says in a video posted on the Fort C.F. Smith Park website.

It bristled with firepower

Fort C.F. Smith, built in early 1863, was considered to be well-designed and sophisticated, with C-shaped earthworks and protected areas for infantry.

Built on land owned by Thomas Jewell, it eventually was named for Maj. Gen. Charles Ferguson Smith, a mentor of Ulysses S. Grant who later served as a subordinate. Smith died of a non-combat injury shortly after the Battle of Shiloh in April 1862.

The property included barracks, officers’ quarters, a cookhouse and other buildings. Photographs kept by the Library of Congress show a pleasant camp, a haven well back from the front lines to the south.

Between 100 and 300 might be at Fort C.F. Smith at a time. The number included heavy artillerymen, who also could be deployed as infantry.

All quiet on the Potomac?

The forts on the Arlington Line, plus Ethan Allen, were built to complement each other. “One fort doesn’t need to protect everything. It can rely on other forts,” said McNair.

That’s why most of the guns in the lunette at C.F. Smith are trained to the northwest, to cover the gap between it and Ethan Allen, instead of to the south, where Confederates attackers would likely emerge. Fort Strong took care of that sector.

The elaborate Arlington Line was meant, in part, to guard the Key Bridge and Aqueduct Bridge approaches to Georgetown and Washington. While there was plenty of drilling, training and marching, there would be down time. Baseball was popular.

In late May 1864, another soldier with the 164th Ohio writes that morale is good.

“All is quiet on the Potomac. But the grand veteran army of the Potomac is not quiet.”

There was real cause for concern. The capital’s defensive fortifications had about 9,000 troops -- less half of their ideal staffing -- in the summer of 1864, because so many men had been sent to Grant’s Army of the Potomac for the push on Richmond and Petersburg. Many of those holding the fort, so to speak, were poorly trained reserves.

Reinforcements rushed to near Fort Stevens helped stem Early’s advance, on July 11 and 12, ending the only Rebel action against Washington. Some men of the 164th Ohio took part in the fighting there. President Abraham Lincoln went to Fort Stevens on July 12, and famously stood on the parapet. According to legend, young officer Oliver Wendell Holmes Jr. said, “Get down, you damn fool!” 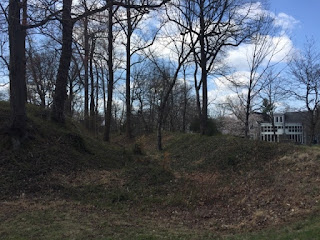 After the war ended, Fort C.F. Smith’s structures were removed and it was largely forgotten, returning to residential and agricultural use. The 107th U.S. Colored Troops for a time occupied the Arlington forts, said McNair.

Some families whose land was taken were able to get compensation for the loss of property and damage during the war. The 65-year-old Jewell testified that he lived on the property with his family until "the soldiers robbed my house and ordered me off” what became Fort C.F. Smith.

The property was never developed, but the construction of 24th Street on Fort C.F. Smith’s southern edge plowed through one-third of the site, and other features wore away, leaving few. Not many earthworks are left.

But some well-reserved, unrestored ones remain, and they are the focal point of a park that includes a half-mile trail near George Washington Parkway and the Spout Run Parkway.

“Our earthwork remains … considering the condition of the individual gun platforms and ramparts, I am surprised at how good a condition they are in,” McNair told the Picket. “It was a quality over quantity issue.”

The property and a house used for events and weddings was acquired from the Hendry family, which witnessed rapid growth in the area -- “the story of the agricultural community giving way to suburban homes,” said McNair.

According to the Post article, only three perimeter forts, Stevens, Foote and Ward, are restored close to their wartime appearance.

Fort C.F. Smith Park is nestled into an Arlington neighborhood, where homes typically sell for $1 million to $3 million.

Day visitors include joggers, dog walkers and students out of school. “We do have a very good, dedicated birding population out here. This is a big site in Arlington for bird watchers.”

“Our big goal is to get people more invested in the role that Arlington County played during the Civil War,” said McNair. “By and large, Arlington County residents are very passionate about their local park spaces and curious about the history they never learned otherwise.”

The county is offering history-based summer camps, school trips and guided tours of Civil War sites. “Fort C.F. Smith historic programming is going strong now and will get bigger and better with the help of the new visitor center.”

The staff is contemplating doing more on the war’s home front, including interpreting the lives of white civilians and enslaved persons.