A small museum on the site of a Confederate prison camp in southern Georgia has added a reproduction version of a weapon used by reserve troops to keep watch on 10,000 Federal prisoners.


“We have tried to create some additions and keep it moving forward,” Judd Smith, an interpretive specialist for Georgia State Parks, says of the Camp Lawton exhibits at Magnolia Springs State Park near Millen.
Camp Lawton opened in autumn 1864 after Union troops were believed to be intent on capturing the infamous prison camp at Andersonville. Lawton was built to hold the POWS moved out of Andersonville. But it was emptied after only six weeks when Federal troops on the March to the Sea approached Millen. Lawton’s prisoners were sent elsewhere or back to Andersonville.
The 9-pound U.S. Model 1855 rifle-musket (a musket manufactured with rifling) went on display at the Magnolia Springs History Center in September. “It is a pretty faithful reproduction (sold by Dixie Gun Works). It is a shooter if you wanted to shoot it,” said Smith. “We wanted to display it.”

The museum, which opened in a renovated building in October 2014, allows visitors to “check in” to assume the identity of an individual Federal POW, learn more about the experience of that soldier and find out his fate. It also features artifacts, interpretive panels, a replica of a prisoner tent and more.
Smith said future plans include the construction of a section representing the stockade wall and a “pigeon roost,” or sentry box used by the Rebel guards.
“The idea is to create that sense of place, the stockade, the pigeon roost. We want to … put people’s mindset back in the time, what it would have been like to be in this walled enclosure,” said Smith.
Officials also want to highlight some of the notable Lawton prisoners, including Boston Corbett, who was exchanged and credited with killing Lincoln assassin John Wilkes Booth, and Robert Knox Sneden, who made riveting illustrations of Confederate prisons where he was housed.
On one end of the small building is a laboratory used by Georgia Southern University students who have conducted archaeological digs on the site, recovering hundreds of artifacts. After a two-year absence, students will be surveying and testing Camp Lawton during field schools next spring and summer.

Ryan McNutt, the faculty member who now heads the Camp Lawton project, would like to see public days return to the site during excavations. Visitors can watch the work, screen soils for items and learn more about the camp’s history.
The Friends of Magnolia Springs State Park recently hosted a public information day in conjunction with the university.
Smith said he got the idea for the reproduction rifle-musket after buying a copy of the book “Confederate Odyssey: The George W. Wray Civil War Collection at the Atlanta History Center.”
Gordon L. Jones, senior military historian and curator at the Atlanta History Center and author of the book, described the remarkable collection in 2014.
“George Wray set out … to just collect Confederate-made or used materials,” Jones told the Picket. “All of them have a Confederate association.” 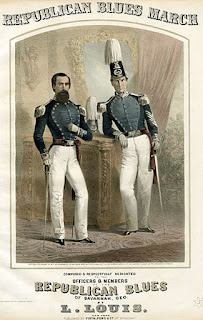 The Camp Lawton exhibit includes images from the AHC and a description of the 1855 rifle-musket in the Wray collection. Wray obtained a weapon marked with the stamp of the Republican Blues, a volunteer militia group formed in Savannah, Ga. The 215 members of the company received the U.S. Model 1855 rifle-musket in January 1859. They were manufactured at the famous U.S. Armory in Springfield, Mass.
The Blues took their guns on a goodwill tour of New York City in July 1860, and had them when war broke out in April 1861. They were relegated at first to coastal defenses. While serving primarily as artillerymen, they had to turn in the Model 1855s in June 1862 to the state of Georgia, which wanted them for its infantry regiments.
“Joe Brown being Joe Brown he decided he wanted the muskets back,” Smith said of the wartime governor.
The weapon in the Wray collection was issued in 1864 to William R. Parker of the 3rd Georgia Reserve Infantry Regiment, a unit used for state defense. Parker, 18, punched his name in the stock and carried the rifle when he and others guarded prisoners at Camp Sumter (Andersonville) and Lawton.
(An antique guns auction site currently has what the seller says is one of the Republican Blues Model 1855s. The .58-caliber weapon, valued at $12,000, has no bids.)

Smith said people who live near Magnolia Springs continue to support the park and its Civil War history. (Part of Camp Lawton is on the site of a closed federal hatchery next to the state park. That portion is maintained by the U.S. Fish and Wildlife Service.)
Officials hope to build tourism in the county. A sign on U.S. 25, for example, touts Camp Lawton.
Posted by Phil Gast at 10:33 AM