A volunteer civic association in suburban Atlanta has received a $75,000 National Park Service grant to develop a preservation plan for Confederate and Federal earthworks dug during the 1864 Atlanta Campaign. 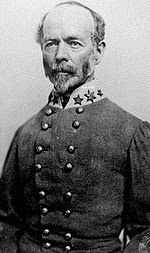 The grant to the Mableton Improvement Coalition (MIC), awarded in July, comes at a vital time.

A previous study showed "that the overall historic integrity of the Chattahoochee River Line battlefield has been adversely affected by modern construction and development."

The plan to be developed by a consultant will cover a relatively small portion of the battlefield -- two tracts totaling 127 acres, owned by Cobb County, near the Chattahoochee River and Nickajack Creek. The county supports preservation of the tracts.

The Chattahoochee was the last natural obstacle for Union troops moving on Atlanta.

In a recent newsletter, the MIC said it wants to safeguard the fortifications and educate the public.

“It is our goal to make the battlefield available and accessible to the public for their enjoyment and their education about the historical resource there," MIC Vice President Robin Meyer told the Picket this week.

Confederate General Joseph E. Johnston (photo, above) ordered a series of defenses north of the Chattahoochee River to be built largely by slaves.

Federal and Confederate forces faced off in earthworks and redans along the River Line for nearly a week in early July 1864 before the withdrawal.

Sherman called a unique fortification on the River Line “one of the strongest pieces of field fortifications I ever saw.”

The timber and earthen redoubts – known as Shoupades -- were built manned for a brief period early in July 1864. 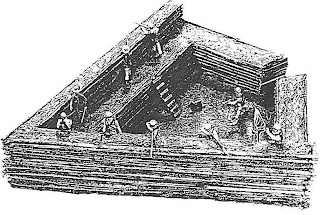 The arrowhead shape of the forts (model by Bill Scaife) allowed defenders to shoot in several directions. Connecting them was an infantry trench. Attackers could be fired on from several angles.

Nine Shoupades have survived along the line, much of which is now private property.

The previous study said that while the River Line no longer exists as a continuous entity, identification and development of “pocket parks” could give visitors a sense of the size and scale of the defensive line.

While the economic slowdown eased preservation pressure somewhat, growth in the area continues. The preservation plan, once submitted in 2014, will need support to make it reality.

“In the end it all comes down to money," said Meyer. "We are in an age when governments are trying to close parks and we are trying to open one.”