The rise of Grant and Forrest

I just completed this 2007 account of the Fort Henry and Fort Donelson campaign in Tennessee that author Jack Hurst contends "slashed an ever-widening mortal wound that split the Confederacy asunder." 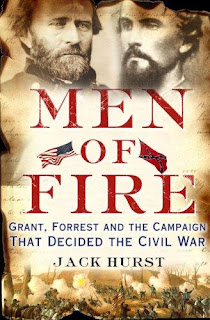 Hurst does an admirable job of capturing the politics swirling behind the 1862 battles that propelled Grant toward greatness, with a few nervous moments two months later at Shiloh. The writer portrays Grant as an unassuming, understated general who survives critics, particularly on accounts of his drinking. In Hurst's view, Grant's boss, Henry Halleck, is as much as enemy as the Confederates, scheming to undercut Grant's role and reputation. Always, Hurst writes, Grant, unlike many Union colleagues, pressed the fight.

I found the sections on the battle-tested Forrest a bit disappointing. You learn little of his character, ambitions and impact on the war. A reader might be surprised Hurst spent so few pages on this, given the book's title and a presumption of comparisons between the generals.

Still, "Men of Fire" is an excellent history of the soldiers, sailors and military leaders who battled for control of vital river and railroad lanes in the South.
Posted by Phil Gast at 7:31 AM