At site of city surrender, a resurgence

A section of Marietta Street in northwest Atlanta, site of the city's surrender during the Civil War, is enjoying a rebound after years of stagnation. 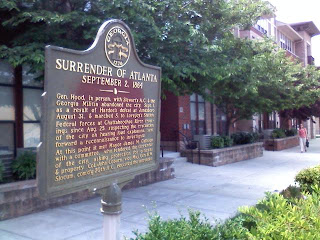 In just a few years, the busy thoroughfare near Georgia Tech has seen an extraordinary boom. Apartment buildings and restaurants fill lots that once saw light industrial use near the railroads. Many of those businesses were shuttered by the 1990s.

M Street Atlanta overlooks the site of the Sept. 2, 1864, surrender at what is now the corner of Marietta Street and Northside Drive. The apartment community features a pool, free wifi, on-site retails and skyline views. It markets itself as being in a "vibrant new area known as Midtown West."

Nearby is the Spoiled Opulence Salon, Thumbs Up Diner and a row of other apartment buildings that front Marietta Street. 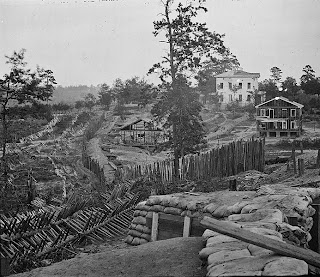 By late Sept. 1, and after a vital railroad south of the city had fallen to Union forces, Confederate Gen. John B. Hood had left the besieged city, burning military supplies and installations.

The next day, Mayor James Calhoun and several other men, under a white flag, took a dangerous ride to the northwestern edge of Atlanta.

According to Atlanta historian Franklin Garrett, the group set out on Marietta Street, where it hoped to meet Federal forces.

"This route led the party through that section of the city which had suffered most damage from the recent bombardment. Nearly every residence had been abandoned, and many of the houses were piles of splintered timbers. The street was badly tom up, and the riders, even in broad daylight often found it difficult to thread their way through the scattered debris."

The emissaries passed the fort and Ponder home and saw an advance body of 20th Corps Troops, commanded by Capt. H. M. Scott, of the 70th Indiana Volunteer Infantry.

Sir: The fortune of war has placed Atlanta in your hands. As mayor of the city I ask protection to non-combatants and private property.

Union forces marched into the city. The Stars and Stripes has flown ever since.
Posted by Phil Gast at 9:18 AM