On the eve of war -- Sumter anniversary 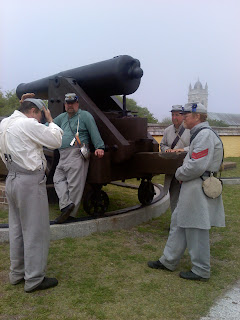 Fort Moultrie, sadly, is little known by most Americans.

Compared to Fort Sumter, Moultrie appears to be an anonymous neighbor.

But it has a richer history -- defending Charleston from the Revolutionary War through World War II.

I always enjoy visiting, in part due to the beautiful beach and Victorian homes also on Sullivan's Island.

Today, we watched a drill and spoke with a few of the couple hundred living historians encamped at Moultrie. 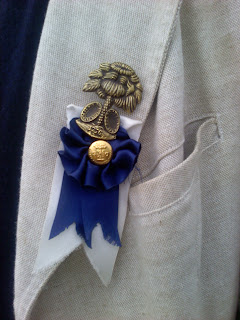 On April 12, 1861, guns from several batteries and forts along the harbor fired upon the Union garrison at Fort Sumter. Moultrie was one of the closest.

Ironically, Union troops were garrisoned at Moultrie before slipping away to Sumter.

A strange fog hung over the city this afternoon, making Sumter difficult to see from the ramparts.

An artillery team explained to a flock of visitors how the 32-pound guns on Moultrie operated. Each person has a specific role during the firing. 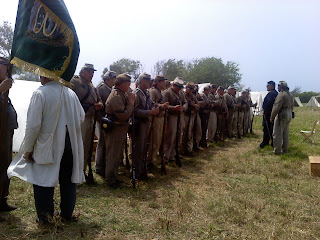 I asked if the surgeon expected to be busy Tuesday.

"I think the other people [Federals] are going to have that problem," he replied. Ready for batle? "Of course, as all Southern boys should be."

Members of the 26th North Carolina drilled Monday afternoon in the grassy field between Fort Moultrie and the harbor. They are portraying the Meagher Guards, a Charleston militia unit that provided security during bombardment of Sumter. 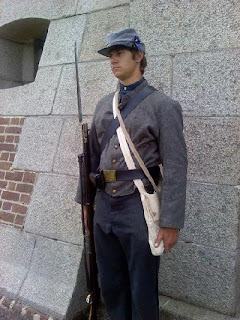 We're eating in downtown Charleston tonight and will attend a sesquicentennial program tonight at a park in the Battery, the very tip of the peninsula.