Enjoying a fresh breeze at the Battery

Tonight, as we sat on chairs and enjoyed the breeze rippling through the Battery in Charleston, I felt peace about our nation's reflection on the Civil War. 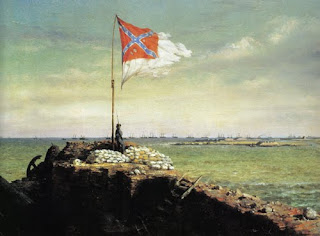 We attended a concert that featured military songs and music from the Ken Burns Civil War series of PBS.

Speakers talked of things likely skipped over in the Civil War centennial -- race, slavery and the role of U.S. Colored Troops in the Union army.

Tomorrow we are up before dawn for a memorial concert of sorts and then on to Patriots Point to watch the bombardment re-enactment.

Historian Emory Thomas talked about how each side thought the war would be over quickly and little blood would be shed. That was before they knew the impact of deadly rifles, disease and casualties from mass troop formations.

"They believed the war would be short because the enemy was full of absolute cowards," Thomas said.

Fort Sumter is bathed in alternating red and blue, a beam of light soaring into the sky.

Image: The Flag of Fort Sumter, The Museum of the Confederacy
Posted by Phil Gast at 11:17 PM