Here she is: Gun that fires first Tuesday

We hit the mother lode on our first stop in Charleston today. 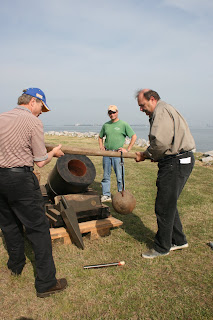 Members of the Bachmann's Battery unloaded the 10" mortar that will fire the first shot at Fort Sumter in Charleston Harbor during Tuesday morning's re-enactment cannonade. (click photo to enlarge)

This is a real piece that was cast well before the beginning of the Civil War on April 12, 1861.

A 6:45 a.m. Tuesday, at Fort Johnson on James Island, Steve Riggs and the other 10 or so members of the crew will fire the bombardment signal shot.

"We'll be dressed to beat the band," said Mike Keller of Greenville, S.C.

The sea coast mortars, during the conflict, were set behind earthworks and below a parapet.

In action, the 100-pound shell would have been lobbed 2,100 yards or so the Union fort's interior. Gunners would have used string and trigonometry to figure the distance and trajectory.

"This is one of the defining moments of American history," said Riggs, of Charleston.

The mortar is on loan from Paulson Brothers Ordnance Corp., which makes guns for re-enactments.

Descendants of the officer who fired the first round on Sumter will be on hand Tuesday for the event, which includes, the Pledge of Allegiance and a memorial to Confederate and Union troops who died in the war.

"It's exciting," said Doug Bostick, of James Island, head of the events at Fort Johnson. "We've been working on this two years."

The mortar weighs nearly 1,900 pounds. Crews poured about 10 pounds of powder. Two men lifted a ball with a pole and another wiped the barrel clean.

"He gave us the instructions on how to use it," Riggs quipped.

When the solemn moment comes Tuesday, a nearby tube will fire a round that will produce a starburst shell effect over Sumter. Blue and gray light beams will soar above the fort.
Posted by Phil Gast at 11:10 AM