The Georgia Battlefields Association is contributing $50,000 toward the purchase of land preserving a portion of the 1864 Resaca battlefield. 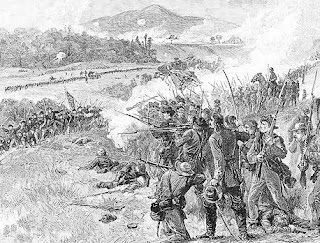 The Trust for Public Land(TPL) bought the 474 acres in 2008, which was part of the Confederate right, and tried to sell it to a preservation-minded owner, but it has settled on a conservation easement on the land, worth about $1.55 million.

• Charlie Crawford Q&A with Civil War Trust
• Picket articles on the GBA and the Hell Hole battles
Posted by Phil Gast at 8:25 AM