The non-violent Dunkers of Antietam

The Battle of Antietam brought the horrors war to Americans in a new, compelling way. The business of photography was still relatively young and the process of making images was, to say the least, laborious. 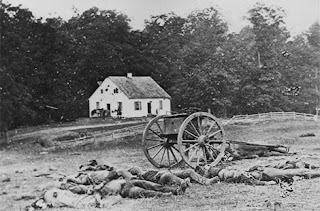 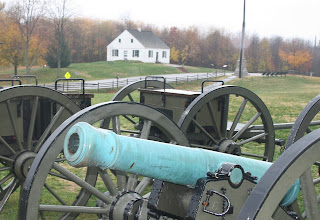 Still, a few enterprising souls accompanied the Union army in the East. A day or two after America's bloodiest day, Sept. 17, 1862, lensmen made the familiar photos that made civilians gasp. Among them are photos of bloated bodies of young men along Hagerstown Pike and other locations on the Maryland battlefield.

Arguably, the most recognized photo focuses on a pile of corpses near a little white church.

According to the National Park Service, "This historic structure began as a humble country house of worship constructed by local Dunker farmers in 1852. It was Mr. Samuel Mumma, owner of the nearby farm that bears his name, that donated land in 1851 for the Dunkers to build their church. During its early history the congregation consisted of about half a dozen-farm families from the local area." 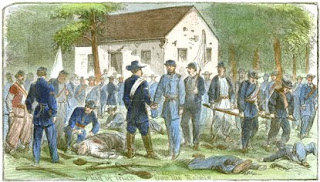 During the Battle of Antietam, Dunker Church was the focal point of a number of Union attacks against the Confederate left flank. The heavily damaged church was repaired after the battle and saw service for many more decades, until a storm flattened it in 1921. A home was later built on the site, but it, too, eventually was gone, replaced by the restored church in the early 1960s. It incorporated materials from the church that existed at the time of the battle.

I sauntered into the plain building during a recent tour of Antietam. Dunker Church is about 150 yards from the vistors center.

The serenity matched the rest of the park, which sits on farm land that witnessed 23,000 casualties.

The Church of the Brethren's website provides details about the pious, anti-slavery and pacifist congregation at Sharpsburg.

"Typical of the derisive labeling experience of many religious groups, they were called Dunkers by outsiders because they fully immersed or “dunked” their baptismal candidates in nearby streams," according to the website. The faith has origins in Germany. 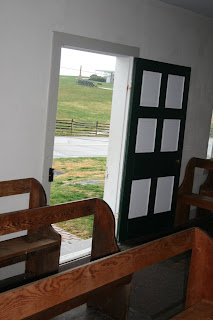 "The church was small and plain, just like the plain Dunker people who built it. No steeple adorned its entrance because the Dunkers considered them immodest or worldly," the Brethren say. "Services of worship convened each Sunday morning with men entering the door facing toward the Hagerstown Pike with women and children entering through another door in the south wall. This was in keeping with the trend of Brethren congregations whose meeting houses were usually segregated by gender."

On a rainy autumn day, I felt calm as I spent a few moments alone in the church. I thought about a question someone asked at the visitors center: How could Americans come to kill each other?
Posted by Phil Gast at 11:53 AM