Amanda Corman, park ranger and curator at Kennesaw Mountain National Battlefield Park in suburban Atlanta, has learned you never know what treasure may emerge from someone's attic, basement or closet.

Last week, the great-great-granddaughter of an Ohio Civil War artilleryman donated a pocket-sized diary she had kept in a closet to protect it from harmful light.

While Corman hasn't had the opportunity yet to read much of the diary because of time constraints and the need to handle it as little as possible until it is preserved and its contents transcribed and digitized, she's excited about the new addition to the park's collection.

Personal accounts, including this one inscribed with pencil, help bring battle histories to life.

"They were people just like us," she said of the soldiers. "That makes the story richer."

Pvt. J.B. "Jerry" Creighton's diary covers parts of June and July 1864, right in the thick of the Atlanta Campaign. The first entry is dated June 29, two days after the Battle of Kennesaw Mountain. While Corman does not yet know for sure whether it was written in Georgia, the dates match the unit's timeline in the area.

Battery A of the 1st Ohio Volunteer Light Artillery participated in the battle. "There is a strong possibility he was here," said Corman.

Debi Merchant, who coincidentally lives not far from the park in Marietta, Ga., made the donation on behalf of her father Jerry Creighton Barrington, who died Jan. 1, 2013.

"Daddy got the diary because he was named for Jeroboam," said Merchant. Some records show his name spelled as Jereboam. 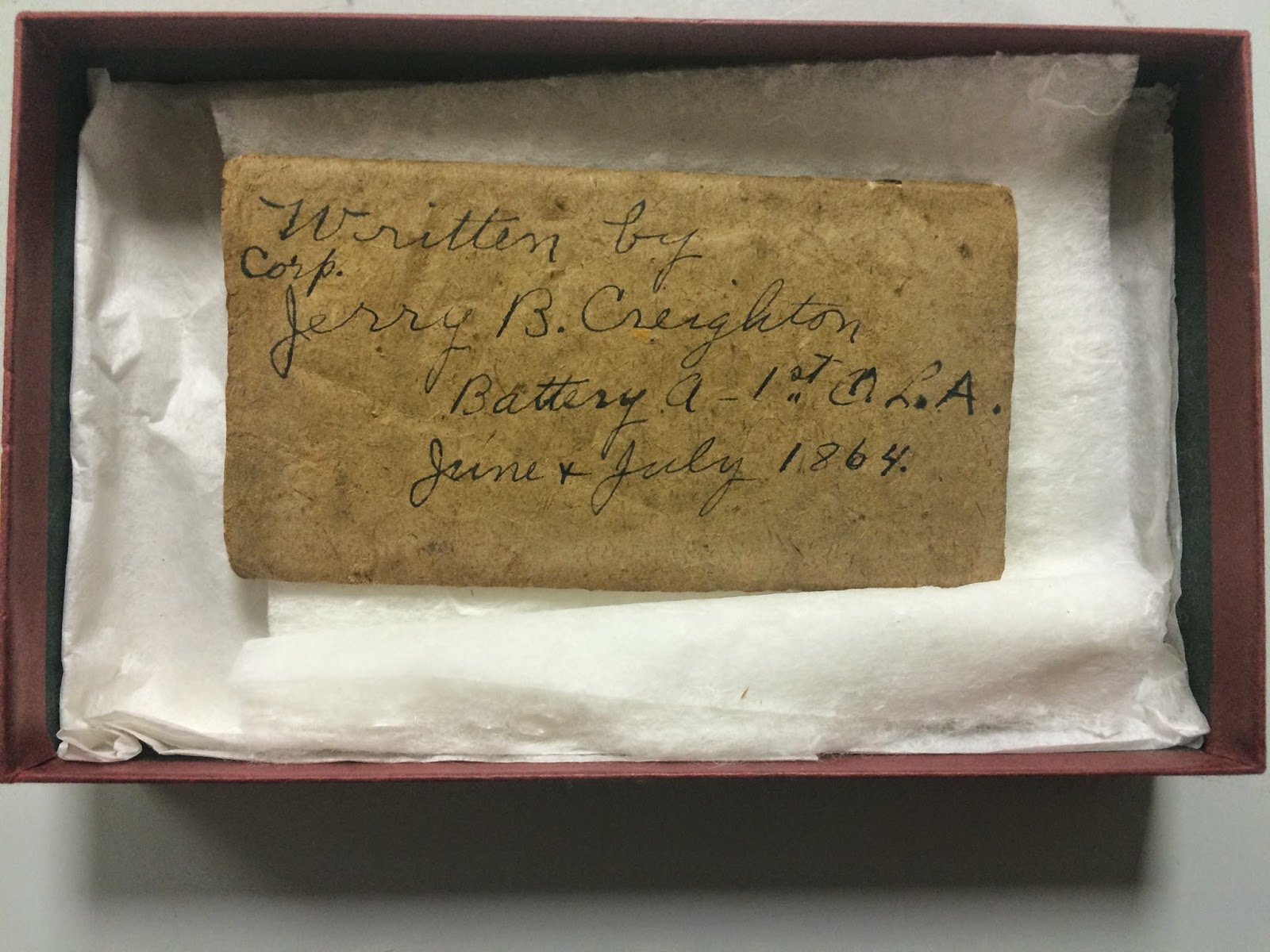 Her father, who had thought about giving the journal to a museum, put it in her care about 10 years ago.

While Merchant kept the diary in the darkest recesses of a closet, the 15 or so pages of entries lost some of their readability over 150 years -- not an unusual occurrence. "It is very difficult to make out anything," she told the Picket.

Merchant hasn't read it in more than 20 years and cannot recall many specifics. So the upcoming transcription will help unlock Creighton's story to the public.

"It is in very, very good condition," said Corman. Preserving the work will take some time and money, whether it is done through the National Park Service or a contractor. She didn't have a timeline for the transcription.

Merchant said she recalls one reference in the diary, something to the effect of: "Father forgive, us. What we are doing is wrong. These are our brothers and sisters in Christ."

A photograph taken by the park of one interior page is dated July 1, 1864: "Tis as still as death this morning -- had another row last night one similar to the one of night before last, which was nothing but a waste of ammunition and a disturbance of peace."

It's not known whether the Ohio soldier kept other diaries lost over time. 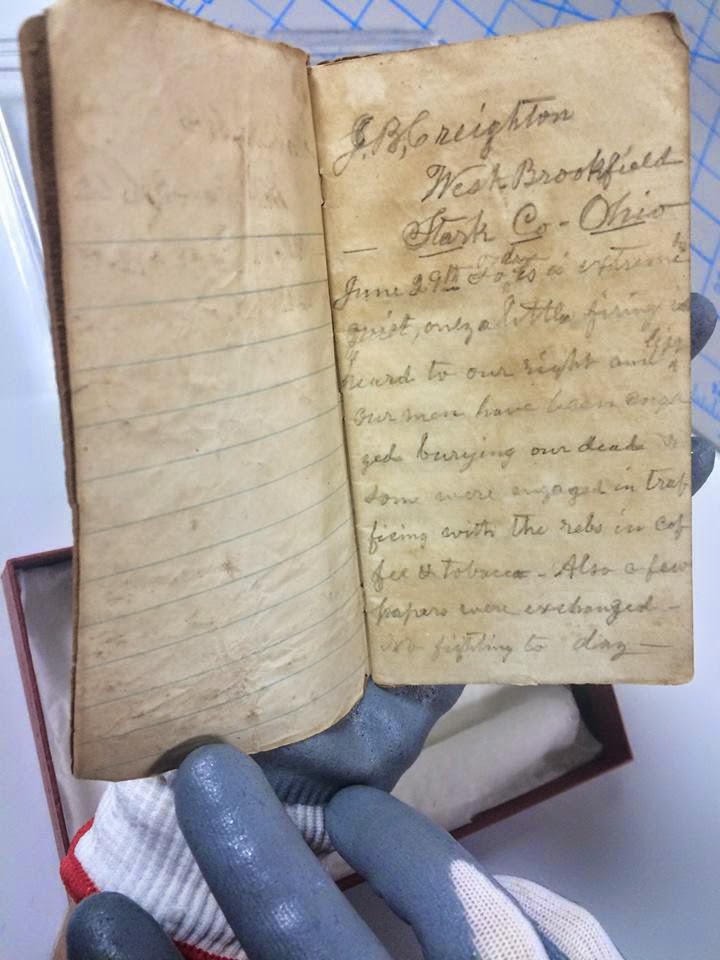 Creighton didn't fit the profile of the typical young Civil War soldier. The native of Stark County, Ohio, was about 36 when the war broke out and he had apparently served in the Mexican-American War nearly 15 years before.

He fought with the 1st Ohio Light Artillery until he mustered out at the end of July 1865. He had one child, died in 1890 and is buried at Glendale Cemetery in Akron.

Rather than continuing on to the March to the Sea in late 1864, the battery was sent to tangle with Confederate Lt. Gen. John Bell Hood's Army of the Tennessee at Columbia, Spring Hill and Franklin, Tenn., said official Ohio records.

According to family history, Creighton may also have served in the Federal Navy during the Civil War and later helped develop a design for a railroad sleeping car.

Merchant said another ancestor, Charles Springer, fought for an Ohio unit and was killed at Pickett's Mill in May 1864, also during the Atlanta Campaign.

Depending on what preservation experts say, it's possible the diary could be exhibited one day at the Kennesaw battlefield, said Corman.

Documents and other diaries aren't currently available online, but researchers can contact the park to do research at its library.

"There is always something you never expect," she said. "Small tidbits can add more to our story."
Posted by Phil Gast at 7:11 PM