This month provides an opportunity for those interested in the Civil War to take part in free, guided tours in areas of the Atlanta Campaign. The Atlanta Preservation Center is marking the decennial of its “Phoenix Flies” program, a celebration of “living landmarks.” 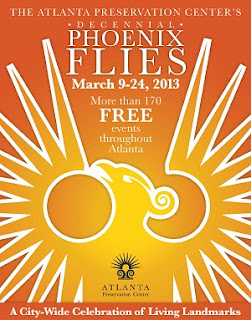 The organization works with experts and other groups to put on the program, which runs March 9-24. Although some of the other events may touch on the Civil War, these are specific to the topic.

Most of the events require reservations.

Click each date below to get details, including times, and availability.

-- March 9, 23: Civil War Atlanta walking tour, put on by the Georgia Battlefields Association. Participants will learn about the city’s role during the war and see where well-known photographs of Atlanta were taken.

-- March 10, 17, 24: Battle of Utoy Creek and cemetery tour. Event includes an extensive amount of walking. Read this Picket article to learn more about this little-known clash during the Atlanta Campaign.

-- March 16, 17, 23, 24: Tour of Shoupade Park in Cobb County. Two each day. The River Line Historic Area helped save these two unique 1864 forts from development. Many of the shoupades built by Confederates along the Chattahoochee River no longer exist. Another community group, the Mableton Improvement Coalition, says this in a recent newsletter: “MIC is working on a Preservation Plan for the Civil War fortifications in Mableton, some of which contain shoupades. This is a great opportunity to see a shoupade up close, which isn't possible now in Mableton. Hopefully the Preservation Plan will be another step in opening the battlefield park to the public.”

Why is the program called “Phoenix Flies”?

"The phoenix is a mythical, flying creature that is born from the ashes of its own incineration, the Atlanta Preservation Center says on its website. “Like this powerful creature, so too was Atlanta reborn from her ashes after the Civil War.”
Posted by Phil Gast at 11:22 AM