The Civil War Trust, a battlefield preservation group, on Tuesday marks the 150th anniversary of the Battle of the Second Manassas with the release of its latest free smartphone "battle app." 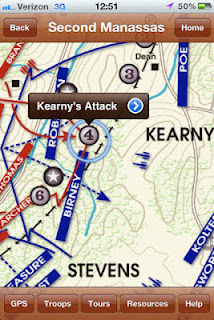 "Like its predecessors, which explore the battles of Bull Run, Cedar Creek, Chancellorsville, Fredericksburg, Gettysburg and Malvern Hill, the new Second Manassas Battle App includes video segments from top historians, period and modern imagery, and detailed topographical maps, all of which help bring the battlefield to life," the Trust said in a statement.

The apps are underwritten with grant funding from the Virginia Department of Transportation and created in partnership with NeoTreks, Inc. • Additional details
Posted by Phil Gast at 8:28 AM