The 8th Arkansas had a big moment at Pickett’s Mill on the evening of May 27, 1864, participating in perhaps the only successful night assault during the Civil War. 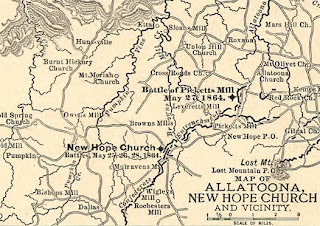 Shortly after a failed Union attack, a horde of about 2,000 Confederates under command of Hiram Granbury charged up a ravine and to a cornfield, surprising the enemy and bagging about 200 prisoners. Roughly 200 members of the 8th Arkansas took part. Four Union brigades had to be resupplied over the coming days.

The Union defeat at Pickett’s Mill in Paulding County (suburban Atlanta) delayed by a week Union Gen. William Sherman’s effort to take Acworth and reconnect with his supplies.

On June 5 (Saturday), some 40 members of the Armory Guards, a living historian group that authentically portrays troops in the western theater, will show the public some of what the 8th Arkansas did and help raise money for the state park, which has suffered budget cuts and flood damage last fall.

“We will be moving over several miles on very hilly terrain,” says Guards vice president Jordan Roberts (right). “Both camping and march routes will be the same as the 8th Arkansas in 1864.”

In the morning, the Armory Guards will do picket duty in the park’s wheatfield and start breastworks construction. At 11 a.m. they move to the wood line and then will work on and hold trenches through the afternoon. Around 4:30- 5 p.m., the authentic campaigners, who will portray Confederates, re-create a portion of the assault.

The event is not a normal battle re-enactment with two sides. It's meant to be purely educational.

Sherman learned some tough lessons when he tried to flank and push back his foe at the Battle of Pickett’s Mill. Troops under Gen. O.O. Howard clashed with those of Gen. Patrick Cleburne. The Federals charged down ravines and uphill against the Confederates. At least 700 of the men in blue died.

Pickett’s Mill is one of the best-preserved Civil War sites in the country. Floods last September, unfortunately, destroyed three foot bridges and washed away the foundation of the namesake mill. 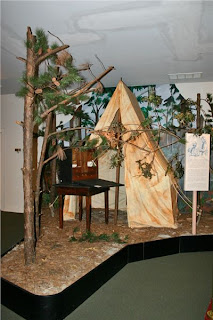 James Wooten, interpretive ranger at Pickett’s Mill Battlefield State Historic Site, this week said only one bridge has been repaired since the floods. He is hoping federal FEMA money will assist repairs, but he is not sure of any timetable.

The trust said, “Covering 765 acres retaining a remarkable degree of their war-time appearance, Pickett’s Mill Battlefield State Historic Site is widely regarded as one of the most thoroughly preserved and interpreted battlefields of the Atlanta Campaign. Still, recent economic difficulties have not spared it from the fiscal challenges plaguing state parks across the country. Following the most recent round of budget cuts last July, the park was forced to reduce its hours significantly, and is now only open three days a week. Of its original staff of five, only one full-time employee remains.”

Roberts says the 8th Arkansas was an appropriate choice to model over the weekend. “They fought constantly throughout the war.”