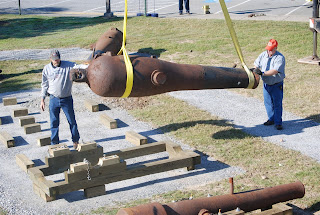 The five 9-inch Dahlgren guns and one 30-pound Parrott Rifle will have a role in telling the story of the Water Witch, a sidewheel steamer captured by Confederates after vicious fighting off Ossabaw Island, Ga, in 1864.

The museum has built a $1.2 million outdoor replica of the Water Witch, which draws attention from 30,000 motorists driving on Victory Drive in Columbus each weekday. The museum’s Web site features a Web cam of the ship. 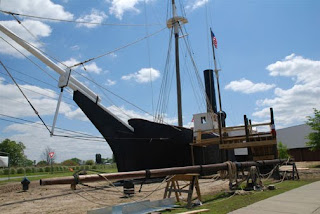 “Ever since we started building the replica, attendance has increased,” says Bruce Smith, museum executive director.

He says nearly 26,000 visitors have come to Port Columbus this year, roughly an 8 percent increase. Many are relatives of Army trainees graduating at nearby Fort Benning.

The Navy sent the large guns to Columbus as a loan from the Boston Navy Yard, where the cannon were inverted and used as posts to tie up ships. Smith says the museum particularly was interested in the Parrott rifle because one like it was used on the Water Witch.

When restored, the Parrott, which fired 30-pound shells, will be mounted on the bow of the Water Watch. The other guns will remain alongside the vessel, as if waiting transfer to another ship.

Port Columbus is sponsoring an event this Friday and Saturday. About 20 living historians from around the Southeast will help illustrate scenes from the capture and talk about life aboard the Water Witch.

Confederate forces boarded and captured the Water Witch, used to carry mail and supplies, on the evening of June 3, 1864. 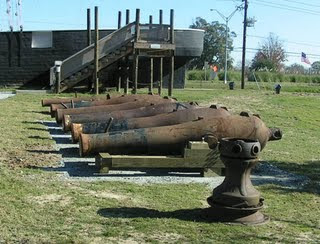 The Union lost two men, the Confederates six, but many more were seriously wounded. One of the Union dead was Jeremiah Sills, an African-American crewman.

Smith says the museum eventually wants to build a dock and water replica next to the Water Witch. Port Columbus has a few artifacts from the vessel, including a Bible, Parrott round and a canvas sea bag.

• More information on Port Columbus.
Posted by Phil Gast at 11:59 AM