Dug through some materials today and came across this map put out by the Georgia Department of Transportation in 1964. 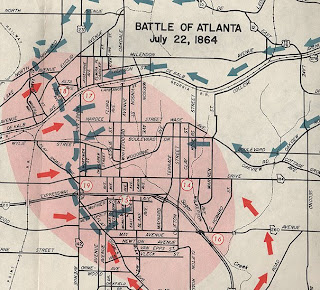 Many street names have changed over the past 45 years. But if you are familiar with Atlanta, this will give you a good idea of where the fiercest fighting took place. Little Five Points, Cabbagetown, I-20, Clifton Road< Ormewood and DeKalb and Moreland avenues all were scenes of heavy combat.

16. Monument to Confederate Gen. W.H. Walker. Walker and McPherson were killed within 20 minutes of each other. 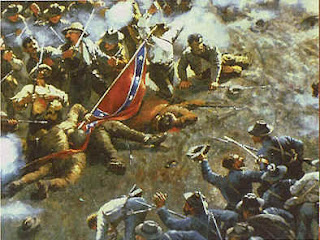 17. Central point in the Atlanta Cyclorama.

18. Site of Troup Hurt House (DeGress Avenue just off DeKalb Avenue), which is the center of fighting in the Cyclorama.

19. Leggett's Hill (Moreland Avenue at I-20) was scene of the most significant fighting of the campaign.