Archaeologists and volunteers are returning to a Chicago residence to dig for more artifacts and evidence of Camp Douglas, a Federal military training center and prison camp during the Civil War.

Last fall, a team unearthed debris, several postwar artifacts and one that did date to the period: A .58-caliber Minie ball, about 75 centimeters (30 inches) down, a depth where they were expecting to find Camp Douglas materials.

Diggers will again work in a backyard vegetable garden inside what is believed to be the prisoners’ living area. They will be working in two spots in the garden.

The Camp Douglas Restoration Foundation is trying to find precise locations of camp features in an urban area that has seen extensive development in the past century, and where much of history is covered by miles of pavement and buildings.

Archaeologist Michael Gregory, a member of the foundation’s board, said the work began Thursday and will likely continue through next Wednesday, April 25. The team found a half dime from 1854, he said Friday.

The home, built in 1885, is in Chicago’s Bronzeville neighborhood.

The resident had visited one of a half dozen such digs at nearby John J. Pershing Magnet School for Humanities on Calumet Avenue. “He loves the neighborhood and loves everything that goes along with it,” Gregory said this week.

Gregory said the goal this time is to get a better view of the camp layer deposit, recover artifacts if present “and maybe find some type of feature --pier support for a building, pit, fence post holes, etc.-- that we can relate to plans we have for the camp in order to know more specifically where within Prisoners Square we are excavating.”

He believes the location where the bullet was found was relatively undisturbed since the end of the Civil War.

The foundation is trying to bring protection to the 60 acres by having it listed on the National Register of Historic Places. That's an involved process that requires evidence that camp-related features survive, even if underground. No buildings survive.

Camp Douglas originally served as a Union training facility for about 40,000 soldiers – including African-Americans -- being rushed to the front. Much of the site was converted to a prison camp for 26,000 Confederates. About 4,000 Rebels died at the prison.

Gregory said the organization also hopes to conduct ground-penetrating radar surveys at six sites, most on public right of way, later this spring. The GPR can see deeper in the soil for any undisturbed camp features. 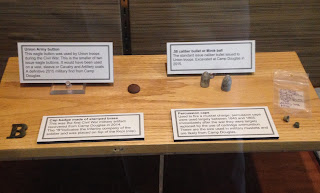 Some of the artifacts found in the neighborhood in the past few years are on temporary display at the Civil War Museum in Kenosha, Wisc.
Posted by Phil Gast at 2:34 PM